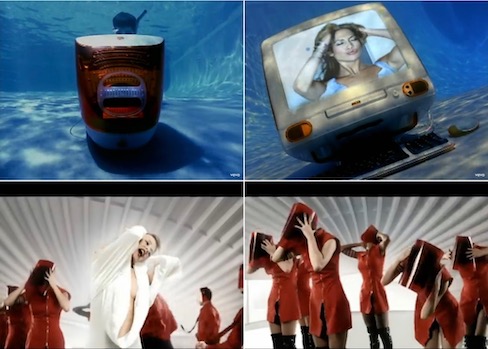 ABSTRACT: In the early 2000s, motifs in popular music began to shift from the sweet addictiveness, introduced and made prevalent by the “Teen Pop” genre of the 1990s, to the unbearable agonic invasion into the teen-pop subjectivity („Overprotected” (Spears), “Can’t Get You Out of My Head“ (Minogue), breakups, and breakdowns). The artcle considers the sonority of the pop scene in its complex integration into the mechanisms of control, which the soundscapes not only support but also inadvertently produce.

In 2001, Australian pop sensation Kylie Minogue released her eighth studio album and with it the single Can’t Get You Out of My Head that helped define the pop scene of the decade. Both the album and the single faced the same peril as Mariah Carey’s Glitter (the fact that it was unfortunately released on 11 September 2001 resulted in poor sales and commercial failure) and would almost suffer the same fate were its release not postponed elsewhere in the world (released on 8 September 2001 in Australia, 17 September in the UK and only on 18 February 2002 in the US).

This contributed not only to the success of the album (and its leading single), but also to the successful bridging of the paradigm of ‘sweet addictiveness’ (introduced and made prevalent by the “Teen Pop” genre of the 1990s) into the world of “post-9/11”. The narrative shift in the songs of pop princess Britney Spears of the time appears as a shift from being completely devoted to the cult of pop consumerism (e.g. I’m a Slave 4 U), presented at the MTV Video Music Awards five days before the terrorist attack) to a rebellion against the society of control, the omnipresent governance of the music industry, and the media’s (over-)watchful eye (e.g. Overprotected, released three months after the attack). Such a shift seems to be more on the side of “oppositional culture” (that Jennifer Chao attributes to music projects critical of the positions of the American government of the time) than on the side of pop patriotism (typical for the post-9/11 pop-cultural landscape). All the while, the transitional Can’t Get You Out of My Head directly fuses the sweet pleasure of being freshly in love with the unbearable agonised intrusion in the core of teen-pop subjectivity, whereby the latter proves to be the established expression of that same pop addiction and dedication, serving as the inner workings of the American pop culture in the world before 9/11. This demonstrated by Minogue’s music video in which the choreographed agony and the inability to think or act are accompanied with the serenity and liveliness of an early spring day.

It is, therefore, not unusual that “Can’t Get You Out of My Head” receives a mention in the essay “Xenochronic Dispatches from the Domain of the Phonoegregore” by Marc Couroux. The overlapping of these seemingly contrary notions of “sweet addictiveness” and an ‘agonic invasion” is the central point, around which the idea of “acoustic control”, the idea that supposedly replaces the paradigm of the “ocular control” (as conceived with Bentham and popularised by Foucault), is established. Couroux’ text expands upon the mechanisms of the “technosonic control society” in the service of “phonoegregore” – “an occult, corporate cabal seeking control over a given population through the use of schizophonic magick.” Popular music is in this case only one of the many fields for application and dissemination of such means, and “Can’t Get You Out of My Head” only a handy example of it, for it mirrors the inner working of its sonic construction directly on the surface. What Couroux understands as the “earworm” – an intricate mechanism, that can be best understood as a biologistic analogon to the “apparatus” of Deleuze and Guattari –, is present in the title, the chorus as well as in the music video of the single. It is a loop that seems to cross the distinction between the implicit and explicit, and by that arrogantly boasts against all attempts of exposing something, since causing something to be seen or apparent falls more in line with the domain of the ocular, whereas the conception or conceptualisation of “acoustic control” functions beyond such sensory limitations.