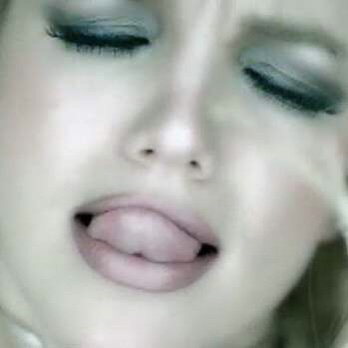 “On its way to the roof of the mouth, her tongue veers off its path and takes the daring trail past the alveolar ridge and teeth, landing on the lips — it is no longer Britney, but ”tongueney”. This is no subjecitiviy; it is a schizoid sound system that is already penetrating us: full of high-pitched notes, ear wormes, conspiratorial intonations of sound imaginaries, screams of disintergrating subjectivities, and developing simulacra.”

THE FEAR OF LOSING HER LIPS (excerpt)

It’s a little known fact that, as a child, Britney developed a fear of losing her lips. Through the years, this fear even evolved into an obsession. Whenever her music features the topic of love (which is not rare), the pronunciation of the letter “L” triggers an immediate athleticism of the tongue, as Britney checks if her lips are still there with a flick of her tongue.

This is, of course, not a hard fact, merely one of the many speculations associated with her image. And yet, the anxiety of the fight revolving around her voice throughout her long career is resounding: Jive Records and her managers wanted if for its profitable resource of pop sonority; she understood it as a basic means of expression with which she could engage as a person. Even though these are two different ontological levels – in the first case, the voice in its direct materiality, a matter of sound; in the second case, the voice as a matter of symbolic participation (as a condition for a successfully constituted personhood) – they are united in a single phenomenon, thereby, addressing the tension that is inherent to voice as such: it’s not a sounds, not yet a language.

Let’s see what psychoanalysis has to say about this. In the process of subject constitution, the voice provokes one of the earliest instances of auto-affection, and, consequently, of self-reflection. In this sense, it features a certain basic narcissism. One summer, Narcissus, thirsty from hunting, went to drink water in a spring and Aphrodite made him fall in love with his own image. The reflection in the water evaded him. He died of sadness and longing. A similar tragedy hides in the fight for (one’s own) voice. The material presence of Britney’s voice is inhabited with many foreign actors – it is never completely hers, always evading – and this constant evading of auto-affection pushes her into a dramatic fight for her autonomy.

While reflecting on this fight, I don’t intend to wander into a search fro the Lacanian and Hegelian dynamics of the master-slave dialectic. If confronted with those, Britney would fear for the death of her authentic self, renounce the pleasures of stardom, and commit to a rebellious construction of her figure (as she did with the never released autonomous project, The Original Doll album), i.e. bury herself in work that would – had these attempts not been nipped in the bud by her record company and managers, and had this nipping not provoked a mental breakdown during which Britney grabbed hold of a green umbrella and used the last ounces of her strength to hit paparazzi cars – prove to be a road to freedom. Such an explication would create more conceptual difficulties that it would solve. At the same time, I am less interested in the intertwining of clearly drawn positions and figures of fight than I am in its noise itself. What I have in mind is a schizophrenic landscape of sonority, full of high-pitched notes, ear worms, conspiratorial intonations of sound imaginaries, screams of disintegrating subjectivities, and developing simulacra, which are happening independently of direct interests and acts undertaken by the participating individuals.

Vocal anatomy has been thoroughly researched. “The larynx is an organ of the respiratory tract. It is located before the oesophagus, between the fourth and fifth cervical vertebrae, and is composed of four cartilages. Spanning between the cartilages are the laryngeal muscles that move the cartilages and tense or relax the vocal cords, narrowing or widening the opening between them. The inner side of the larynx is lined in mucous membrane that is tender and sensitive. On each side, there are two mucosal folds with a small sac between them. The lower mucosal folds serve as vocal cords and are spanned between the thyroid and the arytenoid cartilages. The slit-like space between the cords is called rima glottidis. During breathing, the vocal cords open; during speech, they come closer.”

When the vocal cords come together, they produce voice, which is further shaped by the anatomy of the oral cavity, especially the lips and tongue. During the vocalisation of the phoneme “L”, the tongue usually bends and flexes towards the roof of the mouth, while the lips remain relaxed in a half-open position. Britney opposes this phonemic norm: she bends her tongue and lips so that they touch. One would expect this change to lead to a somewhat distorted phonetic character of what is pronounced, yet, surprisingly, this does not occur. The sonority of the pronounced phoneme does not mach the performed movements of the oral cavity.

What is happening in the middle of this material inconsistency? On the one hand, the perspective is wrong: pop is a multimedia form in which sounds and image often struggle to keep a mutual temporal consistency – in other words: they are not always synchronous. In this sense, the sound of the superstar’s voice and the image of her body do not necessarily have to correspond. Their consistency is not guaranteed with a material presence of a mutual source – which is nothing particularly new. The end-product is a synthesis of various clips, iterations that are often full of differences.

As much as this explains how this inconsistency occurs, it fails to give a reason for why it does so: where does this tongue athleticism come from? If inconsistency only happens during the basic operation of pronouncing the phoneme “L” and if this inconsistency only appears when the pronunciation is analysed between sound and image, i.e. in an intermedia manner (and not in an individual medium – i.e. not exclusively at either the level of the image or the level of the sound, where the sonority of the phoneme and the image of its pronunciation are consistent in their iterations: a correctly pronounced phoneme can always be heard, an erroneously pronounced phoneme can always only be seen), it would be difficult to imagine that the reason for this inconsistency is a mere temporal characterisation of the end clip. The inconsistency is too consistent for it.

What if the inconsistency is not just a coincidence or a matter of careless editing?

This is where the tongue becomes a separate phenomenon – the “tongueny”, as it is known online. We are thus moving away from a scene filled by concrete people, individuals – no more “Britney”, only a sort of “tongueny”. But, then again, if this is not about concrete people, what is it about? With its new phonetic dynamics, love opens the depths of partial-objects as described by Melanie Klein. She claimed that the body is divided into a violent bustle of parts/organs, mouths and breasts circling around the psychoanalytical scene between the mother and her child. On its way to the roof of the mouth the tongueney’s tongue veers off its path and takes the daring trail past the alveolar ridge and teeth, landing on the lips. Its fear of losing lips processes the loss of the lack itself – a lack of the mother’s breasts, which is, according to Klein, key to the formation of the subject. It processes the lack that keeps the it in the pre-personal regime of partial-objects, in a noisy depth Gilles Deleuze would qualify as full of “crackings, gnashings, cracklings, explosions, the shattered sounds of internal objects, and also the intricate howl-breaths of the body without organs”, i.e. everything that shapes the schizoid sound system.

This is the origin of the obsession with tongue athleticism. When what is lacking is the mere possibility of constituting the promised whole, there is no lack that the silent tongue paranoiacally seeks in the hopes of finding a smidgen of sense. This means that the fight for voice has less to do with Britney and her record company than it has with the tongueny itself – the schizoid sound system in which the Voice of the superego never successfully rises from its own noisy depths.